“I take the good with the bad. I can’t love people in slices.” —Sean Connery

I feel the same about our life in the tiny house: it’s impossible to love it in slices, so I just loved it in whole. That doesn’t mean, however, that it was all easy.

Here are the rest of things we found most challenging while living in our tiny 95 square foot caravan. (And no, I’m not including the time we were pulled over on the side of Australia’s longest stretch of nothing with a blown tire.)

Because the house is so small, you become dependent on outdoor spaces to supplement your lifestyle. (Another one of my favorite things!) The problem is when the weather isn’t cooperating with your need for outdoor living. We were lucky that we were able to housesit for some friends during the coldest six weeks of winter last year. Not only was it frigid (yes, there are places that get cold in Australia!), but it rained for almost those exact six weeks. Ugh.

We were so grateful not to be confined to our little 95 square feet during that time. We could have done it—necessity is the mother of invention and creativity, right?)—but it was easier to shift the family for those few brutal weeks. Alternately, we could have driven someplace warmer during those weeks to avoid the brunt of winter, but that didn’t work for us as we were in the middle of house-hunting for a “normal” house during that time and needed to stay put.

Right off the bat I have to say that I don’t define hospitality as something you do, but something you are. Because of that, tiny house life absolutely does not mean that hospitality needs to be thrown out the window. What it does mean is that you have to be more intentional and creative with the way in which you express your hospitality.

For us that meant outdoor cooking and dining when the weather was nice, or sometimes meeting in the park rather than at our house. But we didn’t let our constraints limit us too much. We once babysat five kids under five in our caravan. Another time we hosted six neighbor kids for an impromptu Saturday morning pancake breakfast. And another time it meant we transformed our kitchen table (that folds down into a bed) for an out-of-state guest to actually stay with us for several days. (She was a close family friend so it worked.)

Where we did feel a bit constrained were the times we would have like to invite larger dinner parties or personally accommodate out of town guests with the level of hospitable care we’d normally prefer. Again, tiny house life doesn’t mean hospitality should go out the window, but it does mean you have to rethink how to express it.

7. Tiny house = limits on baking and cooking and food storage

As an American, I grew up used to big, weekly grocery runs with my mom, which meant a full fridge and pantry. In later years, Costco came on the scene and—hello—it was all over. Buy big to save big—that’s the habit I had to break when moving into the caravan. It was a huge challenge for me to rethink our food and meal habits, but it wasn’t impossible. We learned to eat more European style—do quick runs to the shops for produce and dairy and bread as needed. Planning simple meals that don’t require a ton of ingredients helps, too.)

The other challenge was not having an oven. I felt this a little, but Ryan felt it even more. He loves to bake (I know—how lucky am I?) and he found it a challenge to limit his cooking to not include an oven. Ultimately it worked though. We had a BBQ, two electric hotplates, a microwave, and a rice cooker. Originally I had thought I’d get a small slow cooker, but after looking in several thrift stores to no avail, I never actually got around to fulfilling that desire. If we ever do another long stint in the caravan I might consider adding that to the mix as a way to cater for all my BOYS, but for now, what we had worked. And besides, Aussies love a good reason to BBQ.

To be honest, this one shocked us. We knew Australia wasn’t the best in terms of internet coverage and access, but we were blown away by just how difficult it was for us to work on the road due to our lack of internet. After having spent a year in the States where internet is literally everywhere and every phone plan seems to include unlimited data, we were constantly frustrated by how hard it was to get online.

Some of that challenge could have been addressed by changing service providers, but since we were locked into contracts, it would have meant paying huge penalties. Even still, much of the areas we drove through had zero access anyway, regardless of service providers. There were times where we were offline for days. Yes, that can sound appealing. . . but only when you’re planning for it and hoping to have an uninterrupted holiday. When you’re trying to maintain working remotely as you go it serves as a major roadblock. Other times when we finally would get access, we’d spend three hours doing 20 minutes of work because the connections were so terrible. Both Ryan and I had moments of wanting to throw our laptops and phones under a tire on the highway many times. (And I won’t even tell you about the time when Ryan drove several hours in the wrong direction because he thought google maps was working when it wasn’t.)

For those that read my favorite things post, please don’t assume that my eight worst things cancel out my six favorite things about our life in the tiny house. (Apples to oranges and all that.) We loved our year in Vinny and we’d do it again in a heartbeat if the timing and circumstances were right. (If you missed Part 1, you can read it here.)

If you haven’t already, you can see more of the day-to-day of what our life in the caravan looked like by following the hashtag #livingsmalltolivebig on instagram. 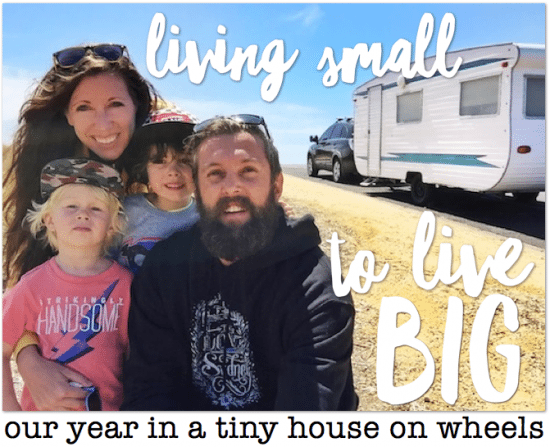 LIVING SMALL TO LIVE BIG: A SERIES ON TINY HOUSE LIVING WITH A FAMILY

Ever wondered what it would be like to move into a tiny house on wheels… with a family? Join the boys and I as we spend a year #livingsmalltolivebig and travel around Australia in our renovated vintage caravan. (This series is still in process—I’ll add the links below as the posts go live.)

Do you have other questions about our time living in 95 square feet or about tiny house life in general? Please let me know in the comments and I’ll do my best to answer your questions or add to this collection of posts.

Exploring the intersection of grief and loss, faith and doubt, wholeness and hope. Author of Grace Like Scarlett. Host of Tethered Summit and Our Scarlett Stories Pregnancy Loss Community. Living and learning with my husband and three sons on Gadigal Land (Sydney, Australia).

A lot of Sydney’s restrictions eased today. I’

On being human // I had just arrived in Australia

The actual best. Happy Father’s Day to the love